The Bison’s highlight of the year was a streak early in the season, winning 4 of 6 . After starting the season 0-4, Buffalo rattled off wins against St. Cloud Tech, Roseu, Bemidji, and Duluth Marshall.

In the St. Cloud Tech game, Jake Braccini scored a goal with under a second left in the third period to clinch the Bison’s first win of the season. Jake later provided the team with another highlight, breaking the school record for points in a career with 137 points.

Tyler Braccini also had a stand out season with 20 goals and 20 assists, enough for the team lead.

“I haven’t really done that since bantams so it was cool to kinda be ‘the guy’ this year instead of leading the team in penalty minutes,” joked Braccini. Tyler had multiple 4 point games, and even a 5 point game against Lake Conference opponent Hopkins.

The team went 1-10 in Conference play in their first year in the Lake Conference. However, the Bison gave multiple teams a run for their money. Games against Edina and Wayzata were decided by one goal (2-3 L and 3-4 L respectively). The only Conference win of the season came against the Hopkins Royals. The Bison exploded, scoring 9 goals in the game and winning 9-1.

“Obviously it was tough there, they have so many good teams,” Tyler Braccini said, “but I thought when we decided to play, we could play with them.”

When addressing the team after the season, Head Coach Aaron Johnson said, “I’m really excited for next year… It’s all I can think about.” 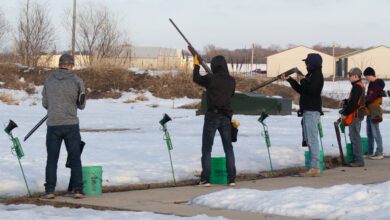