For sophomore Jacob Scherber and junior Charlie Desmarais, this would be their first state appearance and something they have been looking forward to for a long time. Both Scherber and Desmarais have been in wrestling for over 9 years and have been wrestling highschool varsity for the past two years without a trip to state. This year they both finally made it.

“One of my goals for the year was to make it to state,” said Charlie Desmarais.

Returning to the State Tournament was senior Adam Treptau and freshman Riley Habisch. This was Treptau’s fifth visit to the state tournament and Habisch’s second.

The 4 Bison wrestlers and their coaches traveled down to the Xcel Energy Center Wednesday, two days before individual competition started. The wrestlers stayed in a hotel close to the arena, which is paid for by the Buffalo Wrestling Booster Club along with all food and other expenses.

“I liked how worry free the whole experience was. For the most part, we didn’t have to stress about anything besides wrestling. Everything else was provided for us. The hotel and meals we had were extremely nice and it made the trip even more memorable,” said Scherber.

Even though the coaches tried their best to comfort everyone, wrestling was still a big stressor for some wrestlers.

“I was super nervous for my first time down, everyone’s watching and there is a lot of pressure to perform your best from the fans, other wrestlers, and mostly yourself,” said Desmarais.

With more than 50,000 people watching at times, and a whole season of work on the line you can see why wrestlers get nervous. Scherber wasn’t affected as much,

“I just did what I normally did to prepare, I think for most people the bigger stage puts pressure on them to change but I wasn’t really affected by it. Wrestling in other big tournaments like Fargo helped” he said.

Despite the nerves the wrestling had begun. Charlie kicked off the Bison with his first match at state to Owatonna’s Cade King. Desmarais put up a fight but unfortunately lost 8-0 ending his season. The season also came to an end early in the tournament for Habisch and Scherber. Habisch lost to Mound Westonka’s Lee Schmalz 6-0 and Scherber lost soon after to Mounds View’s Rowan Morgan with a score of 6-3. All three wrestlers were disappointed with their performances at the tournament, but there was some good that came out of the whole event.

“I think I’d just describe the whole trip as a good learning experience. For Charlie and I, it was something we hadn’t done before so we were constantly learning how things work down there,” said Scherber.

“I was pretty disappointed with the trip, but now I know what to prepare for next time and how to improve” said Desmarais.

The last Bison wrestler that remained in the tournament was Adam Treptau. In the past Treptau has placed 5th and 3rd, giving him high expectations for this year. Treptau won his first match with a score of 10-0 over Stillwater’s Conner Weiss. He would then move on to face Evan Ronsen of STMA, a wrestler who he had already lost to twice this year. Treptau came up just short of the win losing to Ronsen 5-2 and was kicked to the wrestlebacks where he beat Andrew Hoffman from Chaska-Chanhassen 6-0. Treptau moved on to wrestle Faribault’s Felipe Ramirez to determine if he would go for 3rd place or 5th place. Ramirez beat Treptau 4-1. Treptau met with Ronsen again in the 5th place match and lost 11-4 to take 6th in the MSHSL State tournament.

“It was good. I didn’t really care what the outcome was. I just wanted to wrestle to the best of my ability and give it my all,” said Treptau 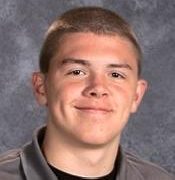 Hello, I am Caleb Drews and I live in Greenfield, MN. I attend Buffalo High School and I am in 10th grade. I play football and wrestle for Buffalo. I plan on going to college and pursuing a career I am passionate in. -Current member of the DREAM TEAM