If you pass these college courses you will receive college credit and won’t have to take those classes again in college.

“I took CIS classes in high school because ultimately I didn’t want to take them again in college and wanted to save money at the same time,” said (2013) Madison Loomis who goes to Winona State University.

Racking up a lot of college credits will help in the long run. Take advantage of the opportunity here at BHS to take CIS classes.

“I definitely benefited taking CIS classes! Throughout my junior and senior year of high school, I ended up accumulating 15 college credits. For most colleges that’s equivalent to a full semester of classes. Many colleges make you take a lot general education classes prior to getting into a program or prior to taking classes for your specific degree, and I was able to complete a lot of those general ed classes by taking CIS Economics, CIS Human Anatomy, CIS Spanish etc. Also, I thought CIS classes were easier than my college classes. I am able to have two majors and still graduate in four years thanks to taking CIS classes in high school, which is not typical of a college student these days! Many people graduate in five years with a single degree. I wish I would have taken more in high school! Plus it’s never a bad thing to have already taken classes and have a little extra cushion in case you decide to switch your major a few times,” said Loomis.

Every college is different but it costs a lot of money to pay for classes, materials and other supplies.

“Going to Winona State, I spend typically about $500 per credit. Since I received 15 CIS credits, that’s close to $7000 I saved by taking CIS classes! And that’s not including textbooks and other supplies and fees that need to be paid for each class, which end up costing a lot of extra money that are all provided for you when you take a CIS class. I have easily spent $2000 in books and extra fees in the two years I have been in college. So I always recommend people to take CIS classes, even if they seem hard! I can almost guarantee they will be 10 times harder in college and you save a significant amount of money,” said Loomis.

In college we exchange money, time and experience for education.  With the CIS program BHS eliminates one variable.  The additional cost associated with gaining college credit. 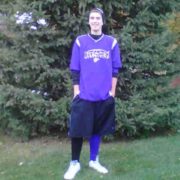 Vaulting his way to the Future !

Why stay in school when you can graduate early?