Laughter filled the crowd at last Saturday’s Tri-M Variety Show, as seniors Emma Hage and Mickey Capps performed their rendition of “Wrecking Ball” (originally sang by Miley Cyrus) on recorders. Their 4th grade spin on the popular song gave people a lot to talk about.

“I didn’t expect that they were going to do ‘Wrecking Ball’. It sounded pretty good! Some people were laughing and I was like ‘What are they doing?’ and then my friend told me that they were being really dramatic during the chorus part,” said Senior Michelle Lee.

Performing at the Variety Show was a last minute decision for them. Two weeks before their performance, Hage came up with a harmony to go along with the music Capps had found online.

“It all sorta started when we were talking about our drive projects for CIS writing Mickey had expressed how he wanted to play the recorder,” said Hage. “I jokingly suggested that he play ‘Wrecking Ball’. Then it actually happened.”

While practicing for the show, Capps and Hage did not only get cheered on for their “out there” performance. They were even criticized by friends.

“Digory Anderson tried to give us that ‘parent smile’, like ‘These are my friends. I’m going to be proud of them no matter what’, but he thought it was the dumbest idea ever,” said Capps.

Minutes before performing their act, Capps and Hage made up their final choreography.

“I was kind of scared that I was gonna start cracking up [during the performance], because we had never practiced without one of us breaking and I did kind of break,” said Hage.

After their performance, Hage and Capps enjoyed the reactions they received.

“Someone’s mom came up to me and asked if I was going into college for music,” said Capps. “And I said ‘No, no.’ but a lot of people came up to us and just said ‘That was so funny’ and how great it was.”

What started off as a drive project for CIS Writing, turned into an act that was talked about by many. Even days after the show, Hage and Capps are still getting compliments for their “quirky” performance at the Tri-M Variety show. 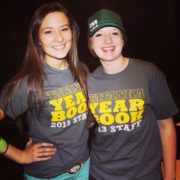 Not many people know this about me, but I'm a twin. I like fast bikes and slow walks over hot coals. I got kicked out of youth soccer for setting fire to the post-game snacks.